The Gift for Someone who has Everything | Internet Domain Name 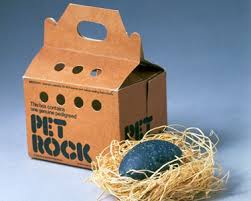 What do you get for the person who has everything? This question has proven fertile ground for the crafty capitalists among us. Gary Dahl became an instant millionaire with nothing but a sketchy idea stemming from a conversation about the hassles of caring for cats, dogs, birds, fish at home. The ingenious Mr. Dahl asked a simple question, “What could possibly be the lowest maintenance pet of all?”

His solution became one of the silliest fads in recent memory: the Pet Rock. For about six months in 1975 these simple gray cobbles were flying off the shelves, packed in a box with “breathing holes,” a bed of straw and an owner’s manual full of goofy puns in the form of “instructions.”

Not to be outdone, others have managed to convince us we NEED snuggies, Tamagotchies, Swatches and mood rings.

Lately we’ve been tempted by the possibility of naming an actual star out there in the universe somewhere! Seriously, if I had everything, I might get me one of those.

Can you actually do that?

The answer is both yes and no.

There are a few stars that have popular names like Sirius, Rigel, and Polaris, but the official namers of space things, the International Astronomical Union, tend to prefer strings of letters and numbers, like “HD 95735.”

So if I part with $50 and get a certificate and directions about how to find my star in the night sky, the IAU will have to start calling it “Unicorn Party Star” from now on, right? Not really.

You can name a star just like you could name that rock over there, or start calling your office building “The Michael Scott Center of Excellence.” Everyone else will still call it by its address.

So go ahead, name stuff! But don’t expect anyone else to start calling it by its new name.

There is something you can name that the whole world will have to deal with. You might not be able to convince everyone that you have your own star, but consider the something a bit more down-to-earth: an internet domain name!

Your own piece of virtual reality that will always have the name you gave it, and if successful, will be known by millions of people! Once you name your corner of the internet, everyone from now on will know it by the awesome moniker you bestowed on it.

Think about the person who has everything, and yet a gift would be just the thing to honor them. Pajamas? No. Another tie? Did that last year. Magazine subscription? No, they’re trying to cut back on paper. Chocolates? Too risky.

Think about it. An internet domain name is a great gift for someone who blogs, stores and shares pictures on the internet, has a website, looking for a job and needs secure and branded portfolio, resume or CV space, or has a hobby or home business that could benefit from a little ecommerce… the possibilities are endless.

Of course the average person wants a couple of extras beside the name itself, like email, hosting, or maybe a website builder. This is where it gets confusing- some internet domain name sellers include a number of these for free with your registration. Others start you off with a super-cheap discounted registration fee and then add on the other stuff at slightly higher than average prices. Also, make sure you know what happens after the two-year initial discounted fee expires.

At Your Domain Pick, what you see is what you get. No hidden fees, or temporary discounts that you end up paying more for later.

A domain registration is truly the gift that keeps on giving, long after your pet rock takes up residence somewhere in your front yard and that star name certificate is forgotten in the attic.

A better way to back up, store, and share your files.

Only available in English.